Using more than 200 charts and 20 market examples, coauthors Jeffrey Kennedy and Wayne Gorman equip you with what you need to use the Wave Principle to spot market turning points and high-confidence trade setups in your own trading.

Now in its 40th year, Elliott Wave Principle is one of the most popular market analysis books ever published. Amazon reviewers say, "Still the Classic and Essential Text for Elliott Wave Trading" and "This is the bible of the theory."

A great starter video. Jeffrey takes you through the basics of the Wave Principle and identifies his favorite trade setups in the wave patterns.

Elliott called sideways combinations of corrective patterns “double threes” and “triple threes.” While a single three is any zigzag or flat, a triangle is an allowable final component of such combinations and in this context is called a “three.” A double or triple three, then, is a combination of simpler types of corrections, including the various types of zigzags, flats and triangles. Their occurrence appears to be the flat correction’s way of extending sideways action. As with double and triple zigzags, each simple corrective pattern is labeled W, Y and Z. The reactionary waves, labeled X, can take the shape of any corrective pattern but are most commonly zigzags. Figures 1 and 2 show two examples of double threes. (Triple threes are quite rare.) 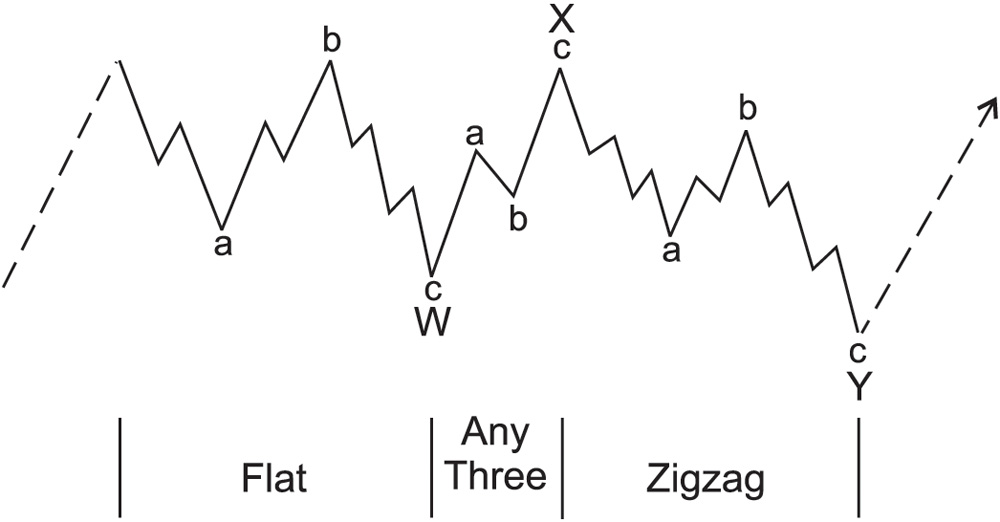 Go Ahead, Jump Right In… X Waves — What to Expect

A Bearish Combination in Bonds

Seeing the Forest Through the Trees Can Improve Your Labeling Please Select Your Country and Enter Your Mobile Phone Number: